The Hell of Spring 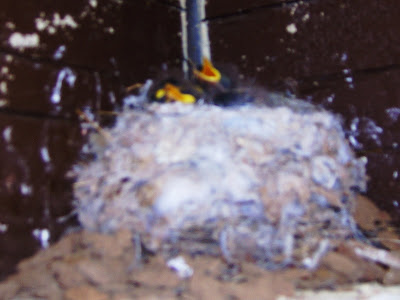 They’re at it again. As the first light warms over the mountains, (about 5 am), the cacophony begins. No one sleeps through this, as it commences right outside out bedroom windows. Our own personal marching band we like to call the “Peeps”. This is the name we have given the small, nondescript brown birds that have claimed our back porch for their own. We named them “Peeps” for several reasons. First being, we cannot find a picture of their species in our “Great Big Bird Watching Book for Old People”. John says they are “house martins”, although as far as I know, that species only exist in his mind. I personally think they are some type of noisy flying rat. But the main reason for the name is that this is the constant noise they make, louder and more mournful by the second. It really isn’t “peep”, but more like a “peeeeeeeeep”, the saddest (and most irritating at 5am) sound you will ever hear.
They found a perfect spot to raise their offspring; a corner porch pillar with a nice, large top (aka/design flaw) that will accommodate a big, roomy nest for a passel of babies. We know it’s coming early in the spring, when Mom and Dad Peep start bringing in twigs, dried grass, and various other pieces of nature that they hold together with mud. Yes, it is interesting and the wonders of nature and all that stuff, BUT, they really don’t like for anyone to be around while they complete their task. John and I, being the tenderhearted fools we are, leave them to it.

This is difficult, as it is by far the nicest place to sit and enjoy our Arizona weather. Shielded from the sun and wind at all times, (something I am sure the peeps took into account when shown the property by their real estate agent), it’s also right beside our pond, so it is a perfect fish watching spot.
Once their home is complete to their satisfaction, usually after some tear down and re-model, comes the laying of the eggs. Mom and Dad take turns sitting on them and this is a relatively nice but short respite between the angry building phase (I sympathize, as I have had many angry building phases myself) and the “screaming mee mee” phase. Once the eggs hatch the nightmare truly begins. Those chicks are insatiable eaters! Mom and Dad are on the go nearly around the clock, hunting, gathering, and bringing back copious quantities of food, for those gaping little yellow mouths. If we humans DARE to actually sit on the porch, or even walk by casually, the parents sit, with food in beak, and begin their wail. “PEEEEEEP, PEEEEEP, PEEEEEP,” they cry, over and over, never giving up until you go far away, promising never to return, and leave them to their important task. Sometimes they become so angry with us, you can almost hear them gritting their little birdie teeth. If you can manage to hide and watch, when they alight at the nest, the new little screamers begin their high pitched chirping, which makes you hold your ears and run to safety.
We then delude ourselves into thinking that it’s almost over. But that is not the case. It just goes from bad to worse. After all, the darling little babies have to learn to fly, don’t they? Here is where the
Peep parents first demonstrate the concept of flight to their moronic children and then coax (with many peeps) or basically toss their babies from the nest. Down they come, onto anything in the vicinity, perching like a drowning man clinging to a broken board. THEN the peeping begins in earnest. The parents peep at the babies, to try to cajole them into leaving the safety of their perch.
The babies, now teenagers I guess, do what all teenagers do, which is argue by massive quantities of peeps that “I do NOT want to fly away and YOU can’t make me!” Unfortunately, this goes on for several days. The teenage peeps flit from one piece of porch furniture to the next, all the while wailing pitifully, and leaving copious deposits of peep droppings.
Suddenly, due to the magic of nature and the juvenile delinquent peeps empty stomachs, (as the parents have finally had their fill and quit supporting their lazy good for nothing offspring), they finally take off. HURRAY! We have our porch back! Much dancing around and popping of champagne corks. But we celebrate too early, because just as soon as this little batch of hell on wings fly away for good, Mom and Dad Peep (who must be Mormon) get empty next syndrome, and the whole nightmare begins again!
(I wrote this short essay last spring after our yearly miserable "peep" episode. Since then, a dear old friend was able to tell me the species of our precious little parasites - Says Phoebes If only she could tell me how to introduce birth control into their systems!)
Posted by Cynthia Short 2 comments: 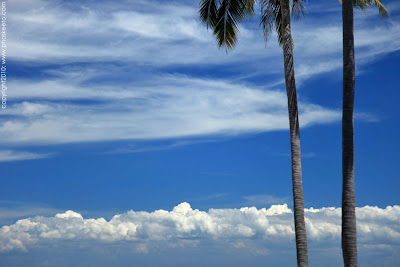 (photo courtesy of Photobucket)
On a VERY few days a year, in this land-locked desert where I live, suddenly the winds change and bring up the wonderful feel and smell of the Gulf of California, over 300 miles away. On those occasions I am transported…

Within this arid desert home,
of sagebrush, dust
and creosote,
on days so rare they might be dreams,
the wind delivers some wild gift.

Upon each waft, each drift of breeze,
floats thoughts of waves
and tropic spray.
Faint taste of salt to kiss your tongue,
and kelp’s long arms caress your face.

Breathe deep and you can smell the sea,
with sun drenched sand
and rustling palms.
As dolphins call to beg you “come”
Then in your mind you fly away.
Posted by Cynthia Short 4 comments: