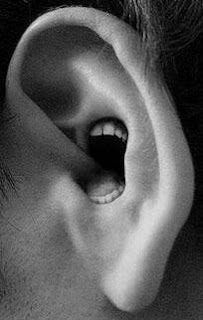 (freaky photo courtesy of Photobucket)
This piece is from an extremely interesting prompt over at Big Tent Poetry, which led me to the  fascinating "Dead Man" poetry of Marvin Bell.  There is no way I could ever do justice to his idea, but here is my lame attempt...

The dead girl waits and watches.
No hurry now, nowhere to be.
And in her final, numbing rest,
she listens to the screams of others.

The cries of pain, injustice, fear.
Sadness thick with held-back tears.
The panicked heart, the strangled throat,
it’s all but curiosity to the dead girl.

The dead girl hears each lament.
Even in silence the dark seeps through,
and in her repose, she only knows,
the futility of emotion.
Posted by Cynthia Short 27 comments: 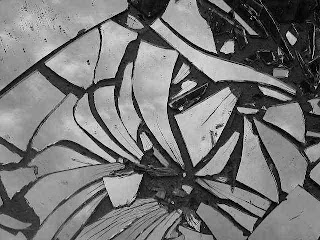 I really didn't follow prompt this week, but instead took some snippets from a few unfinished pieces on the same topic and wove them together into one.
Knowing someone with mental/emotional illness is a difficult thing to watch and attempt to deal with. I know someone with these issues; this poem attempts in it’s feeble way to describe her pain.


She holds herself through too long days
enforcing stillness with granite jaws,
Her nails tattooing crescent moons
While gripping demons
with sweat slicked palms.

Afraid of breathing much too deep,
best to keep each intake shallow,
or she might loosen up a scream,
expelling monsters
she cannot tame.

To see her face, at first you’d think
her mind was just preoccupied.
But then look deeper at her trance,
bright eyes unfocused,
blind to light.

Then some slight switch is somehow flipped
and nerves, emotions come unwound,
like prickly knotted sisal rope
of tangled threads
that won’t be bound.

With thoughts careening wildly
through eternities of mindless pain,
no one can ever talk her down
And backwards to
a life of sanity.
Posted by Cynthia Short 13 comments: 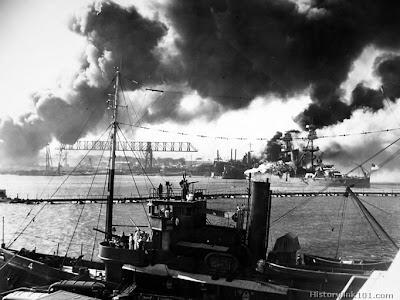 (photo courtesy of historylink101.com)
I wrote this piece in honor of Pearl Harbor Day; in thanks to my Father, Father-in-law and four of my uncles who were all decorated soldiers during this time; and also in honor of every person affected by the terrible tragedy of WWII.

The news brought them out of the woodwork.
Boys with patriotic attitudes,
dreamers with fabulous imaginations,
or ones with simple bloodlust in their hearts.
Those with delusions of grandeur
or the desire for adventure,
to swash-buckle through the Pacific.

Instead they found near annihilation-
of dreams-of innocence- of their very lives.
Battling something utterly alien,
completely incomprehensible.
Violence unheard of, unbelievable.
A vast Pacific of bloodshed,
primitive atolls of mindless atrocity.

They mustered through, those boys.
Growing up rapidly, finding their way.
Gaining strength in numbers,
courage through necessity.
We can never repay their gift.
There are no words to give thanks
to that "Greatest Generation".
Posted by Cynthia Short 6 comments: 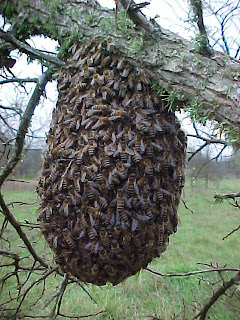 The Prompt this week over at Big Tent Poetry was "ENOUGH".  Very thought-provoking, I wish I had the time to turn all my ideas for this into poetry...
Those screaming needs
and hard demands,
swarm around like angry bees,
and buzz within my addled brain,
as sharp, relentless stings enforce
their painful, bloody victories.

Meanwhile, my gentle wants,
desires,
my small attempts
to carve a piece,
a sliver of that precious self,
must fall away like dying leaves.

Crushed beneath commitment's boot,
as slowly I forget to dream,
and accede to others appetites,
while I grow smaller every day,
from losing self to selflessness.
Of strength, I'll never have enough.
Posted by Cynthia Short 21 comments: